Today is day 6 and I made drawing instead of painting. It is drawing of the chair I am sitting on when I drink my coffee in the kitchen. Actually, my lap top is on it while I am writing this now. This drawing of chair is tribute to all the chairs in the world, because I know some chairs that are bolder than humans. 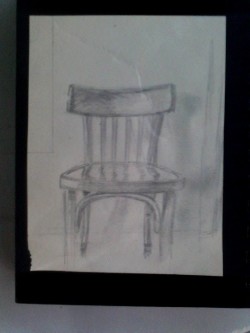 It doesn’t make sense? Okay. Let me tell you a story.

Shea Sizemore is one of my dear friends. He is married to Lile, sweet girl from Macedonia and they live in the States with their 2 kids, Maks and Frances.

Shea is a film maker. He does that for a living, but also because he is passionate about movies. At some point in his life, while they were in Macedonia, me and some of my friends had the honor to participate in making short films with him. Those were funny days. We had a chance to be creative and have fun in the same time. We managed to make 6-7 short films. (Truth be told, he was doing the films, we participated, but I write “we” to boast).

In case you think we were not serious: we even get the award on a festival for short films in Novi Sad! Sadly, soon after that film, they moved away. If they stayed, who knows, I might had great career as an actor in Hollywood. Looking at my broken nose, I think I would have a chance acting a bad guy.

One of the shorts that Shea made at that time was called “The uprising”. It was made for “One minute festival”, but he missed the date and he never send it. The whole film is 1 minute long and it is the story about chairs, humans and courage. Here it is. Enjoy.