Cartoons are funny. When my son Viktor was 4-5, he would not eat regular cheese, just because Tom and Jerry were eating only cheese with holes. So, as a good father, I would take the knife, made holes inside and the problem would be solved.

In reality, it takes time to make good cheese. Beside cooking and pressing, there are some bacteria included in the process of making those holes. If you are curious and search online for Emmentaler, among the other things that describe this cheese, you can read: “Historically, the holes were a sign of imperfection, and until modern times, cheese makers would try to avoid them”. You can also read that: “It is considered to be one of the most difficult cheeses to be produced because of its complicated hole-forming fermentation process”, or “The cheese tastes delicious”.

Now you may think that I would make parallel between this cheese and our lives and write something like “even with the holes in our souls, we are still worthy, blah blah blah…”, but I won’t. At the end, it’s just a painting of cheese, nothing else. 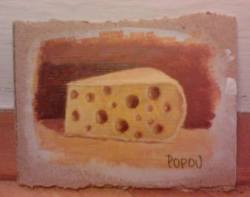